With the recent announcement that the UK Lockdown is running for at least another three weeks, it is likely that disruption to student recruitment will continue for a while longer. That said, the proposed stages for coming out of Lockdown which were briefed in the media on Sunday, suggests a phased approach which could see things starting to get back to normal. I’m sure that like me you very much hope that is the case.

The question then is what to do in the meantime? Once you are done with online tests or assessments, what next?

Picture this – it is summer 2021. You’re at an interview for a graduate role, and you’re asked very candidly, what did you do to improve yourself during the COVID-19 outbreak?

This is an important question. One that can demonstrate how you adapt to adversity. One that displays how you take responsibility for your personal development. One that you really don’t want to answer by saying you played games on Twitch for weeks on end!

If you’re currently employed as a key worker, in retail or elsewhere, thank you. Keep safe and your work is appreciated.

Perhaps you have signed up to volunteer, either to support the NHS or local community groups to help protect others during these difficult times. Again, thank you for what you are doing.

If you are at home and looking for things to do, now is the ideal time to be developing new or enhancing existing skills.

Head over to the Open University website, where there are over 900 free online courses to access, which includes some language courses in French and German https://www.open.edu/openlearn/free-courses/full-catalogue

When this summer is out, do you want to have a hole in your CV, or a bunch of shiny new skills and certifications to flaunt in future applications?

The choice is yours.

Posted by The Placement Officer at 09:46 No comments:

We're All In This Together

When I wrote my last blog article in 2016 I hadn't planned to park this site. It just kind of happened that way. My youngest was barely a month old, I was trying to impress the powers that be while acting up with a colleague on maternity leave, and I'd stood down as Trustee for PlaceNet in lieu of increased professional and personal responsibility.

In the intervening years, I haven't really felt compelled to write. The eagle eyed amongst you who have followed my Twitter account over the years, will have seen a cryptic pinned message, which followed an incident with the thought police, who considered my social media presence at odds with my employer. Talk about taking a sledgehammer to crack a nut.

But here I am in April 2020 and for the first time in years I'm writing. And what strange times we find ourselves in. It is bizarre to think that as recently as two weeks ago the schools were still open, placements were still being advertised in good number, and the lockdown had yet to be implemented. Two weeks. Seems like an awful lot longer don't you think?

Like you, I've been going through a period of adjustment. Working from home full time completely at odds with the norm in which WFH was largely frowned upon within my team. Appointments fully switched online/telephone, losing that daily face to face interaction with my colleagues and that unexpected meeting when someone you weren't expecting walks into the office needing my help. Office phone calls diverted to mobile via Jabber. Departmental meetings over Teams. Zoom meetings and webinars. It is only a matter of time before I'll be asked to do Compliance training via Houseparty.

Within the first three hours of homeschooling my kids, I came to realise that failing to get offered a PGCE Primary place in 2002 was the single best thing to ever happen to my career. I'm not a teacher, I don't have the patience or inclination to make exaggerated phonics noises for the letter N. But we are at the end of week 2, and come through relatively unscathed, balancing the demands of the day job with trying to maintain a relatively structured school day for three primary age kids in different key stages. Joe Wicks is a national hero. The world is on its head.

What has struck me most over the past fortnight is the power of community. I've never been the most sociable person in my department. In fact, during an ill-thought through team development session, my personality was publicly shamed as one of the most introverted in a department of 40 people. Big thumbs up to whoever thought that idea was a good way to bring people together.

But after well over a decade of going to the same office five days a week, it is a very strange experience moving to remote working. True I don't have put up with office politics, gossip and the endless supply of birthday cakes in the kitchen, but the loss of community is stark. Sure, you can check in with emails, messages, the occasional phone call, but it is a very different experience from a career of conventional office structure.

It was with great pleasure then that I took up the opportunity to join the ASET Regional Hub South East meeting yesterday morning. I've not been to a physical meeting with them before, in part due to scheduling conflict with school runs, in part due to my previous association with PlaceNet and not wanting to cross the fence. The silliness of tribalism! But as I logged into Zoom yesterday morning, for the first time in two weeks, aside from a few moments of clapping in doorways on a Thursday evening, I felt a tremendous sense of community.

Thanks to everyone who participated in our South East Regional Hub today. Great to see you all and hear how our members are responding to the current situation. Tomorrow, over to the Midlands! #ASETGoesOnline #ASETTopTips pic.twitter.com/A4Ilb8tClT
— ASET (@ASETOnline) April 2, 2020

We had 75 industry colleagues joining together to bring a sense of normality to the prevailing madness. Shared issues of adjusting to remote working, concerns about dwindling placement opportunities, how to assist our students currently facing furlough or dismissal, not to mention juggling work with children. I couldn't help but raise a smile watching other attendees have their kids appear in shot every once in a while or try to gatecrash the meeting.

While the meeting progressed I listened in as attentively as I could, while managing Maths and English classes for my boys, catheterising and even managing a game or two of Uno. There is a myth than men can't multitask, but I'd like to think that I'm going some way to destroy it.

What I took away from the meeting was a feeling of pride. That despite the immediate difficulties we face individually, collectively and within student recruitment as a whole, we are a resolute bunch who have seen economic downturn before and come through the other side, who will run through walls to help our students to make the best of a bad situation.

We don't know what the full effect of this global pandemic will be, but I can say with certainty that placement professionals will tackle this issue head on, doing their absolute best for their students.

I was so proud of my industry colleagues. I am proud to be a Placement Adviser. We are all in this together and we will prevail.


Posted by The Placement Officer at 15:05 No comments:

In praise of Campus Brand Managers

I recently had the pleasure of attending the inaugural Campus Brand Manager of the Year competition at Enterprise Rent A Car's European HQ. The event was a celebration of the great work undertaken by Campus Brand Managers across the UK, promoting internships, placements and graduate opportunities, to their fellow students. Four regional finalists delivered outstanding presentations highlighting their achievements, successful referrals to Enterprise recruitment programmes and pitched for why they deserved to be named Campus Brand Manager of the Year. Chelsea Gannon from Liverpool John Moores University was undoubtedly a worthy winner.

There were a number of things that stood out to me from this event. Firstly, the finalists themselves. The quality of their presentations was superb and I was rather blown away at the level of responsibility they had taken on to promote Enterprise on campus. My recollection of being a brand ambassador many moons ago to a long since disbanded online book retailer was of occasional flyering of libraries and computer labs. These guys mean serious business. The Ambassadors very much provide the eyes and ears on campus for talent acquisition, meeting prospective candidates, holding advice sessions, networking events and even running their own assessment centres. And what made them so effective in their role is having already undertaken a placement or internship with Enterprise, so they could talk first hand about the management schemes, responsibilities and opportunities for career progression. I've long been an advocate of peer mentoring, inviting final year students to speak with second years about their experience. Enterprise ambassadors take things to a whole new level, and I was highly impressed at their commitment to the company and success in sourcing new hires.

Of course there is no point having outstanding Campus Brand Managers if there is not a quality brand to promote. For most of my decade of working in placements, I've had to follow the work of Enterprise from a distance, as the students I was working with required roles in line with their course criteria. However, there is much to admire, not least the quality and quantity of accolades picked up in recent years. There is clearly a positive ethos and strong set of values ingrained into company which was evident not just in the ambassadors but also with the members of the talent acquisition team who were present. Many of the recruiters have been working in the company for quite some time, which has allowed them to build sustained relationships with placement and careers teams across their regions. As somebody who has recently starting working with Business students, I am already developing strong links with Enterprise for both Management Trainee and Corporate HQ opportunities which should bear fruit in the next placement cycle.

It is not just the people at Enterprise that impresses me, but also their digital profile. The Enterprise Careers website is a textbook example of getting things right. Content is rich, including blog articles, video profiles, details of the recruitment process and most importantly for me, access to the recruitment team. On many careers websites, you are lucky to find a generic email address, let alone a named contact. Enterprise recruiters are among the most accessible in student recruitment, with contact details and social media accounts listed to encourage engagement; something I would like to see as standard across the industry.

Back to Campus Brand Managers, and having seen for myself just how effective they can be for Enterprise, I won't be at all surprised to see more companies adopt similar schemes to promote their brand. Sure, you sometimes get one off events where free cups of coffee are given out adorned with a company logo, but for a truly effective sustained campaign, the model of employing former placement students to provide a regular campus presence, working in tandem with talent acquisition specialists to identify future hires, present a powerful option for employers seeking emerging talent in the crowded market of graduate recruitment.

Posted by The Placement Officer at 15:45 No comments: 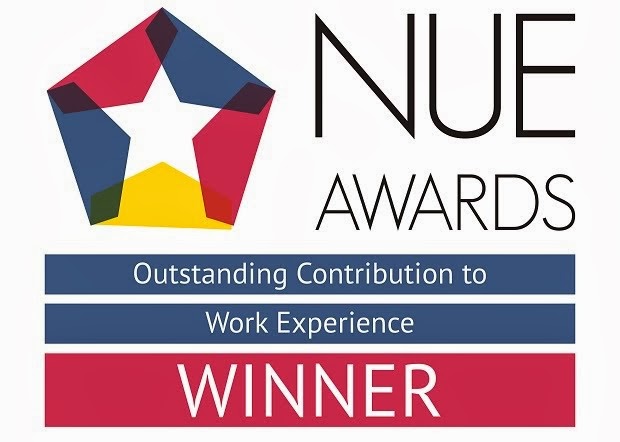 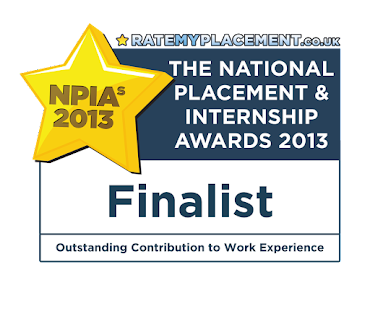 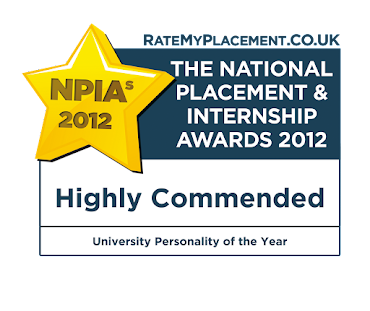 The Placement Officer is pleased to support the activities of Shine. Click on the picture to find out more about their work in raising awareness of Spina Bifida, Hydrocephalus, and helping families affected by the conditions.

What am I tweeting?